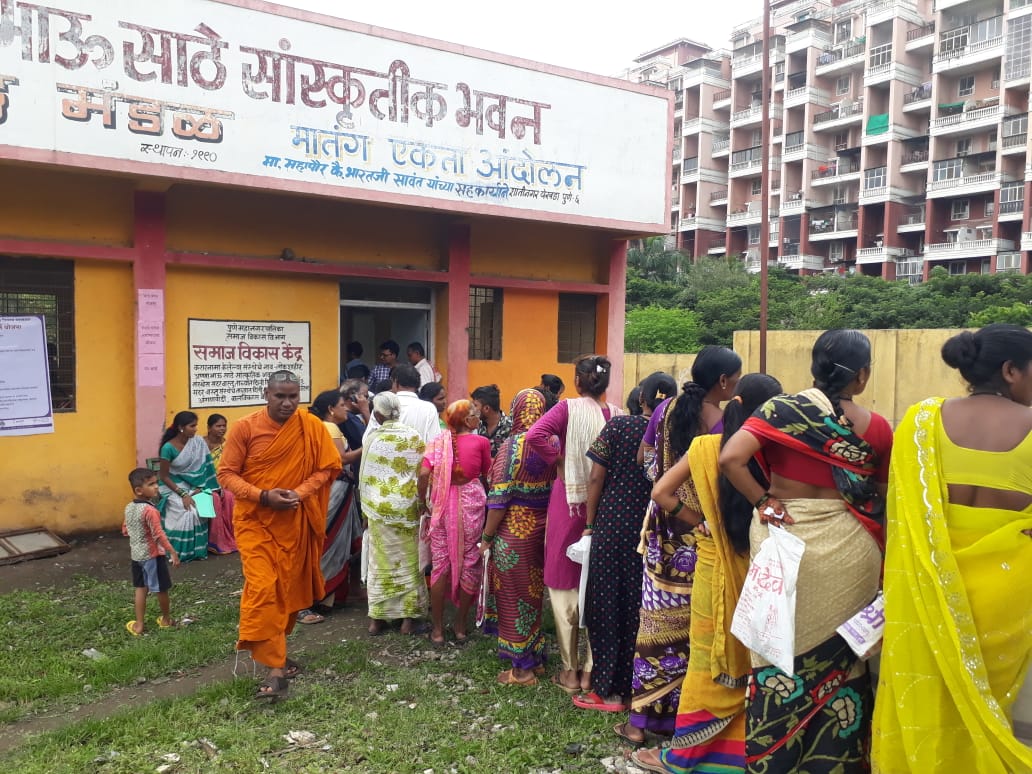 Mega Camp for Schemes and Entitlements

On September 11, 2019, during a day-long mega enumeration camp organised by Sahaya, 1222 community beneficiaries were successfully enumerated. In addition, through a Single Window, an initiative facilitated by CFAR and supported by the District Administration and Pune Municipal Corporation, 421 applications for key government schemes and entitlements such as Aadhar Card, Sanjay Gandhi Pension Scheme among others were submitted. “Every citizen has a right to basic entitlement such as ration, voter and aadhar card” – Sub District Officer Mrs. Trupti Kolate

The need for such a mammoth exercise became necessary post-heavy rains in August this year when severe floods hit many parts of Maharashtra. Agricultural lands were destroyed; settlements were submerged resulting in a high death toll. The living nightmare for many of those who survived was the loss of official documents which are requisite to access benefits under Government welfare schemes.

In a prompt and in a concerted manner, CFAR responded to this crisis in urban poor settlements of Shanti Nagar, Indira Nagar, Katar Wadi, Phule Nagar and Bharat, Pune, through its Sahaya Single Window by appealing to the government to help those in distress. Loss of documents such as ration card, voter card, Aadhar card and need for schemes like Sanjay Gandhi Niradha Yojana (SGNY) and Urban Poor Aarogyadayee Yojana (UPAY) were areas of concern that were brought to the notice of authorities.

To deal with the feeling of helplessness, Help -desks members and community messengers held one day awareness drives across the 5 affected settlements and managed to educate and mobilize around 1400 households about different key social security scheme and their entitlements.

A major achievement for Sahaya was Deputy Mayor issuing a letter to the District Collector to organize mega social security schemes and entitlements enumeration camps. This call to action ensured government departments were actively involved, for better outreach and effectiveness of our camps.

For identifying the real distressed beneficiaries, Sahaya also forged a close coordination  between the affected community and service providers, held continuous follow ups with the officials of Pune Municipal Corporation and the District Collector while updating them about the flood victim’s needs.

With further instruction from the District Collector, on 11 September Sahaya held the ‘first ever’  enrolment camp on key social security schemes and entitlements, as recalled by Dr. Ramakant Sath, President of Anna Bhau Sathe Mandal. “We lost all key documents like ration card, bank pass book, and birth certificate during the flood. This camp was really help full for us, we applied for ration card, PAN card and Income certificate.” – Nilangi Nougire, 53 year old Shanti Nagar community beneficiary

In the process, Sahaya also identified a large number of community beneficiaries who due to discrepancy with the required supportive documents, could not enroll for basic universal documents like Aadhar card and Ration card.

To tackle this issue, Sahaya along with civil society organizations such as Maharashtra Domestic Workers Union, Maharashtra Construction Workers Union, Aashrya, Kagad Kach Patra Kashtkari Panchyat, Yardi and Streewani plan on conducting a follow up meeting with the District Collector to emphasise the issue of exclusion in Aadhar card enrollment and updation. The request to start fulltime Aadhar Seva Kendra nearby urban poor settlement and increase machinery in existing centers of post offices, bank and PMC Ward offices is also being mooted and followed up.