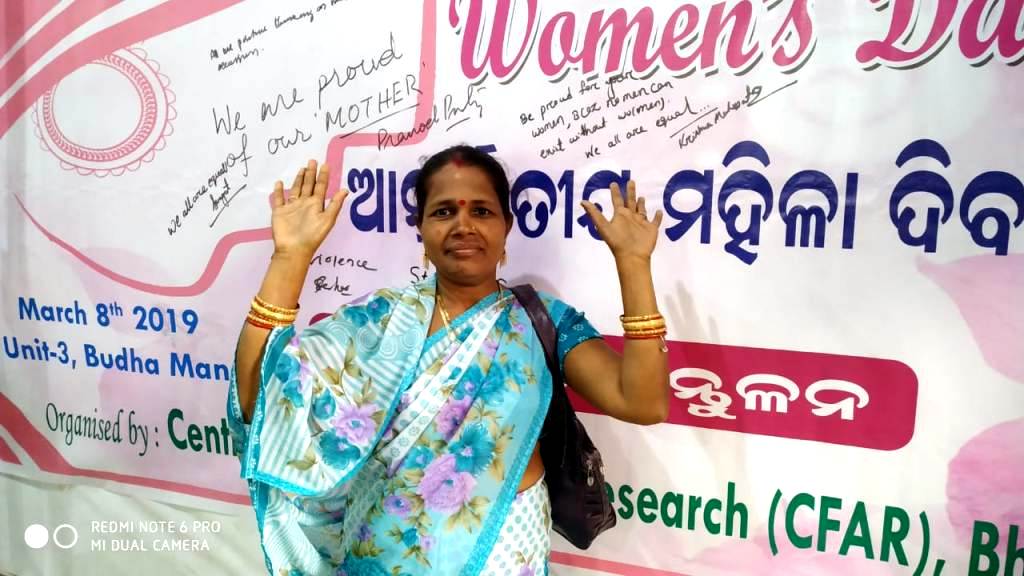 The Centre for Advocacy and Research (CFAR), Bhubaneswar, observed International Women’s Day on March 8, 2019, by celebrating the achievements of women champions who have brought significant changes in their own lives, their family and the community, by establishing and promoting gender justice norms in their action. Speaking about this Jyoshna Sahoo, CFAR stated “Women’s day should not be celebrated only for one day rather it’s a process of everyday life. The day is celebrated to acknowledge the achievements of women in different spectrum i.e. social, economic, political etc. but it only can be achieved if we consider them as equal. And equality does not come suddenly, it’s a life cycle approach. Each person has a role to play to bring equality in society and it starts from our family. for example; if we brought up our children with equal knowledge, work division and  behavior then probably down the year they behave respecting to each other Gender balance can only come once we promote equality and men need to be involved in this process”.

At an event organized at Buddha Temple where more than 150 women and men participated, women from the community shared their heroic acts of breaking away from the bondage of inequitable traditions.

One woman of the community said she is taking care of her old parents abandoned by her brother, while another said she is creating awareness about sex determination and elimination of the girl child. Many said they raised their voice against violence against woman and some others said they fought for their right to property. “After going through a torturous phase in my married life, I broke all ties and am now staying with my parents and working for the development of the community,” said Manjulata Dalei, a community worker.

As this year’s theme of International Women’s Day was #BalanceForBetter; all participants spoke on a case in point that brings balance in the society and promotes equality between men and women. Mihir Mohanty, Program Manager, Swabhiman, said: “The hearing and visually impaired women cannot voice their opinion against domestic violence and they become a victim of sexual harassment too. We need to create awareness among people about the equal rights of women with disabilities.”

Speaking on the occasion, Snehanjali Mohanty, Member, State Commission for Women said: “Both men and women are important in a balanced society. Respect for each other needs to be encouraged and propagated so that our next generation learns from us.”

“Equal work division needs to be promoted and the practice of work division at home based on the gender of the child has to be stopped by parents,” said Pramod Ku. Prusty, Deputy Commissioner BMC. Speaking on the same lines social activists Sri Som also said that the work division between men and women based on the stereotyped gender roles should be condemned. He said the government is also taking various initiatives to bring women into mainstream and priority is being given to women beneficiaries in ration card, gas connection, IHHL subsidy, to cite a few.

Goutam Arya Bhusan of Taru Leading Age said: Each day should be celebrated as Women’s Day. “Women have the courage, patience and the capability of doing everything.” Rajalaxmi Dash, Member, Child Welfare Committee also had a similar view and said the process of strengthening women’s voice should continue and it should not be a one-day event.