Bhawna (40) has been living at Saragara Basti, Jodhpur for so long that everyone calls her Bhawnaji Bai-saa.

People respect her and go to her with their problems because they have faith in her. Hence, she feels it becomes her responsibility to help them as much as she can.

Bhawana is educated and committed for improving the condition of her settlement and ensuring that all those who live here do not face any problems as far as food, clothing and shelter is concerned. Her father was the village headman and from her young age, Bhawna used to attend meetings, go to government offices, meet with service providers.

“When the coronavirus infection was declared a pandemic, we all got worried for our livelihood. The most affected were daily wage workers, street vendors and helpers. They had families to feed and no money in hand.”

“I was faced with a similar situation at home. My husband passed away a few years ago and I have to look after four young daughters. For me also the question was how to make ends meet.”

So, Bhawna spoke to a Bhamashah (a donor) and requested him to give dry ration kits to the neediest families. She also coordinated with the Nagar Nigam and shared with them a list of families who required food. Once the list was approved, it was submitted it to the Nodal officer and food began to come.

However, the quality of food was very poor. “We could not eat it and the quantity was also less. My requested were not getting recorded so I lodged a formal complaint with the Nagori Gate Police Station officer and requested him to look into this matter in his capacity as the local monitoring officer for cooked food.’’

Thirty-five-year-old Monica of Mavadiyon Ki Ghaati, had limited resources available with her when the lockdown happened.
So, she decided to first help the young and the old members in her slum.

“I live with my elderly parents, husband and three children in an underserved slum cluster in the heritage area of Jodhpur. I am a single child of my parents and have to take care of them as well. My husband works as supervisor at the Jodhpur airport.

I am a skilled tailor and Bandhej worker. As soon as the lockdown was declared, I used my skills to make masks which we gave to elderly men, women and pregnant women. Three other members of the Misaal Committee adept at stitching and sewing also joined me in this.’’

Once the masks were ready, the Misaal Committee members divided the households in the settlements and went door to door giving the masks, telling people how to use them, and sanitise them by washing in warm water and Dettol. They also shared videos of social distancing practiced on different parts of the city and asked our community to do the same.

A few days later, they realised that daily wage workers and street vendors in the settlement did not have food to eat. They had no ration cards and there was nothing they could do as they were not getting any work during the lockdown. Their limited resources were coming to an end.
“I made a call to the Mr Sushil Kumar, Sanitary Inspector and requested him to help us with cooked food boxes for these families.

Immediately lists were made and we began to get the food. Misaal Committee members helped in door to distribution to the needy families. With his help we also listed families who needed dry food grains and shared them with the Nagar Nigam and CFAR team for help in rations. Now we are listing names of workers and filing application for the stipend of Rs 2500 to these families so that they have some cash in hand for their daily expenses.”

Raju (25), Male Volunteer of Rajbagh Meghwal Basti takes pride in saying that they do not have a single coronavirus suspect case in the cluster.

“Our members are very helpful and they support the neighboring bastis also. In fact, Rukmini, a member of the Misaal Sanitation Committee distributed free masks she had stitched to neighbors.”

Working as a security guard in SDM Hospital in Jodhpur, Raju’s wife Sangeeta is a member of the Misaal Sanitation Committee and is presently staying at her parents’ house as the couple are expecting their first child.

“Having worked in the hospital, I have acquired a lot of information on preventive care in times of COVID 19. Many affected patients are coming to this hospital for treatment and I provide them all support and help even though it is not a part of my duties. Similarly, I have been disseminating information on preventive care in my basti so that we can all be safe and avoid any risk of infections.’’

Raju and Sangeeta have been involved in interacting with officials from the Jodhpur Municipal Corporation from day one. They have together coordinated with the Sanitary Inspector facilitated regular fogging and ensuring that waste is not piled up at any point in the settlement.

These days Raju is contributing to the relief efforts of the government and CFAR.

“We helped the Block Level Officials to enumerate the households that did not have ration cards. I also collected donations from friends and along with my brother made arrangements for providing cooked food to 35 needy families for a week. The Nigam is now sending us packed boxes which we are distributing to these households,’’ Raju says.

Neetu Devi (34) of Ravti Road Basti, Jodhpur is an ASHA sahayogini and member of Misaal Sanitation Committee.
“If I can help one family a day in this difficult time to get food and not sleep on an empty stomach, I am content,” she says.

Her mother is a nurse in Barmer and mother-in-law, a social worker. They have been her inspiration. As ASHA Sahyogini, she teaches children, women and men on the benefits of good health and well-being.

“When I got married and settled in Ravti Road Basti, my supportive family encouraged me to help the community. Slowly I began to enjoy this work. Along with my husband, we worked with the Nagar Nigam officials to get the roads and electricity poles renovated.’’

“After becoming a Misaal Committee Member, I began to stress on the importance of keeping our settlement clean and waste free. To reduce the threat of coronavirus infection, I went house to house distributing free masks. Food was also provided through Bhamashah (donor) and police station for children and elderly people from most poor families.’’

Nowadays, she is filling up application forms for all daily wage workers so that the financial assistance of Rs 2500 can be given to them. “CFAR and the MLA are both helping me in getting the forms together and sending them to the Nagar Nigam for approval. We have filled 158 forms and money has been credited and withdrawn by 35 families, others have not updated their passbooks as the areas is under the red zone and banks are not sending any messages to them.’’

Guddi Devi of Misaal Sanitation Committee feels feeding the hungry is a good deed, and God has chosen her to help others and hence, she cannot fail Him.

Guddi Devi (30) lives in Baiji Ka Talab, and is a role model for many women in Jodhpur. This ordinary housewife with an extraordinary go-get attitude did not wait for the government or CSO to help the dale wage workers, thela walas and poor tenants living in the settlement “When the lockdown began on March 22, my mother in law and I met the pujari of the temple in Baiji ka Talab. We requested him to use the donation and the chadawa for providing food twice a day to daily wage labour, vendors, destitute and needy families living in the basti,’’ Guddi also went door to door to collect donation and seek support of the women to cook food. Many other women also came forward, and they all took turns to cook daily. Some of them served food and others worked with the Sanitation Inspector to get the settlement sanitized, waste collected regularly. A team also worked to reach out to Bhamashah and individual people for donation and make contribution in kind including flour, rice, pulses, oil.

“When the Nagar Nigam began to supply cooked food through the Akshaya Patra kitchen we approached them and requested them for packets which we are regularly collecting and distributing to 40 needy families every day.’’ 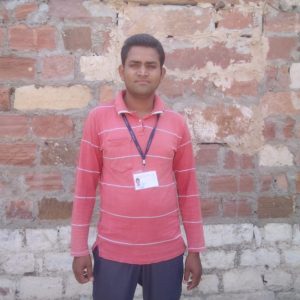 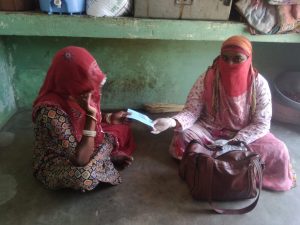 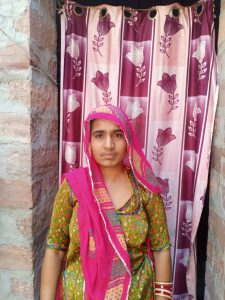