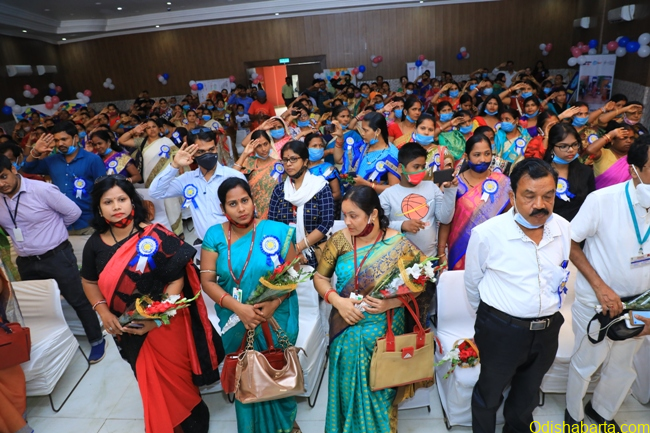 Bhubaneswar, March 8, 2021: The Centre for Advocacy and Research (CFAR) honored women and transgender persons across Indian cities for their roles as ‘Community Champions’ on the International Women’s Day. Women’s leadership and empowerment were discussed today with as part of this year’s theme, “Women in leadership: Achieving an equal future in a COVID-19 world.”

In Bhubaneswar, the Hon’ble Minister for Women and Child Development and Mission Shakti Ms Tukuni Sahu attended an event, organised by the Centre for Advocacy and Research (CFAR) to celebrate the International Women’s Day, said “women were building the nation and were the backbone for the nation’s empowerment.”

Citing her own life as an example of women’s empowerment, the Minister said she began her life as any other girl child, being married off early and facing early widowhood.  “My transition from a widow to a public figure is an inspiration for women to fight for their dreams,” she said.  She also said the state was women-centric with the reservation for Panchayati raj institutions having been raised from 33% to 50%, and 70 lakh women being part of the Mission Shakti Yojna. “From papad and pickle-making, to fisheries and other schemes, these women are empowering themselves by being productive members of their families and society,” she said. She further encouraged and appreciated CFAR for continuing its work around women and vulnerable groups.

The event started with welcome address by Smt. Jayashree Das who went on to elaborate the “Women have proved their power in handling the global pandemic, efficiently paving a way for the generations to be inspired. When it comes to sanitization and health, women have immensely contributed for the betterment of the community and society as a whole,” she said.  She stressed the leadership opportunity women have been used for solving community problems.

Transgender persons, persons with disabilities, women, men, safai mitras were among those who were felicitated for their contributions, particularly for the empowerment of women with the support of CFAR. The event had the participation of Shri Ranjan Sawant, known educationist, who said men and women were two wings of the same bird, which make the bird fly with proper coordination, failing which will result in imbalance.  The director of SSEPD Mrs. Bratati Harichandan highlighted the importance of celebrating women everyday due to the power they have shown in handling the pandemic crisis. She stressed that women can flourish in their dreams if supported by their family and male counterparts.

Ms. Banita Moharrana, IIC women police station, hailed her male counterparts for bringing the women to the front stage in the community forum. She said that a woman is bold by virtue of birth as she handles the immense pain of the delivery of her child. She stressed the importance of treating a child equally at home with respect to upbringing for a better and equal society. She lauded the TGs and PWDs as a pillar of motivation for society.

The joint director of school and mass education Smt. Priti Prativa Bholo shared her personal experience with gender discrimination at her home, being the fourth girl child, she could never get to sleep in the lap of her mother.

In Cuttack, senior officials including the Deputy Commissioner and the Commissioner of the Cuttack Municipal Corporation appreciated women’s involvement in water, sanitation and hygiene (WASH) initiatives, including desludging and raising awareness around WASH, among others. The CMC Deputy Commissioner Sanjibeeta Ray said the corporation would be working a lot with area level federations, which are community-based, for taking forwards the WASH programme. Commissioner Ananya Das appreciated the role women were playing in making WASH programme a success by getting the community to engage, accept and demand services.

Women have been central in coping with the pandemic and contributing to the process of building both an integrated response and a pathway for recovery. This includes everything that the community, particularly the sanitation and frontline workers and marginalized groups such as transgender and persons with disability, have done to minimise the spread of COVID-19, primarily through safe and effective hand-washing practices, and improving sanitation for all and dignity of the community.

Ms. Akhila Sivadas, Executive Director of the Centre for Advocacy and Research (CFAR) said, “We helped raise the profile of women and transgender among others, in various events across India to recognise their contribution while outlining the path for their further involvement in their own development and that of society. This year’s theme recognizes the tremendous efforts by women and girls around the world in shaping a more gender equal future and recovery from the COVID-19 pandemic and highlights the gaps that remain.”

Some of the Community Champions in Odisha included the following:

Nilu Pradhan, Kalinga Studio Kinner Basti – Nilu is about 35 years old. As a transgender, Nilu always encouraged others to fight for their rights. Earlier, Nilu worked as a beggar but she decided to change her life. After much struggle, she got her identity as a transgender. She now motivates others to lead a dignity and wants to mainstream transgender persons. So far Nilu has helped 27 transgender persons to get aadhaar and ration cards.

Pramodini Maharana, a person with disability (PWD), Basti Bikas 1:  Pramodini Maharana is 43 years old. She is a Single window Forum member and leads a self-help group constituted by PWDs.  She works for the inclusion of PwDs in social security schemes while campaigning for making toilets accessible to them and connecting them to livelihoods. She also takes up violence-related issues.

Sanjukta Sahu, Suka Vihar: Sanjukta, 42 years old, is a Single Window Forum member who is a Master Trainer in her area. She is coordinating the desludging process in her settlement. During the pandemic, she worked tirelessly to generate awareness around COVID-19 and WASH, etc among 70 adolescent girls and more than 50 women through paintings and demonstrations. She also monitors the cleanliness of her settlement and engages with government officials.

Manisha Samal,14 years old, student of class 9: As  a members of the Kishori Club, Manisha has the courage to work against stigma and discrimination. She is an active participate in adolescents’ meetings. By using her creative mind, she can explain or understand anything. She motivates others on personal hygiene, safe disposal of sanitary pads, fighting superstitions, the importance of WASH. She has been titled as Sakhi Saheli for her commitment towards other adolescents.

Tapan Sahu: Tapan is 36 years old and is an active leader in the Tapoban Basti. As a Youth club president, he takes the responsibility for any developmental work. He also has been grooming others so as to create the second line of leadership. Tapan worked during the pandemic to generate awareness so that people could take precautions while he also co-ordinated with government and non-government agencies. One of his major achievements is his emphasis on equality between the genders at the household level, and equal access to sanitation.

CFAR’s Deputy Director, Programmes Ms. Juhi Jain said, there were many more “Community Champions” in all key areas whether in strengthening sanitation, addressing violence against women, bridging the gaps in accessing social, WASH and legal entitlements, etc. “The International Women’s Day 2021 is unique because the pandemic has in many ways impacted the lives of people in an unprecedented way, more so in the case of women and marginalised communities. They have been affected disproportionately, but this has not deterred them from leading the fight against the virus and supporting every process that is shaping the recovery from the pandemic,” she said.