It is more than an enterprise for Delhi’s “padwomen”

New Delhi: They are already being hailed by India’s national media as Delhi’s padwomen. The women of Mazdoor Kalyan Camp, a modest locality in New Delhi’s Okhla area, are a determined lot. They sit in their ‘unit’ on one of the coldest days the city has experienced in over a century, cutting, pasting and folding– the essential steps needed for making sanitary napkins. One of them, Jyoti, even has her infant as she follows the steps required in making a napkin. She has the company of seven other women who sit with her, each engrossed in their task. “This is the most important thing we have done in many years to make ourselves and our families financially secure,” says Jyoti.

The journey of these women towards self-empowerment began two years ago when the Centre for Advocacy and Research (CFAR) began an initiative in their area, an unauthorized settlement crammed with tiny houses, with a high density of population and several shared services like toilets and water. The services were far from satisfactory – the community toilets were dirty, taps were few while the area was littered with waste and the drains were choked. “It was nothing like what you see now,” says Vidya, another member of the SHG.

The Community Management Centre (CMC) set up by CFAR comprised women from the locality who learned to identify their problems, mobilise community opinion, and approach the civic department responsible for managing it. In due course, the women CMC members became knowledgeable on the subject of managing water and sanitation issues in communities, including solid and faecal waste management and drains. “We – realised that menstrual waste was a major concern in the settlement as most napkins were non-biodegradable. The use of napkins available in the market made of silicon and plastic sheets was a major cause for reproductive tract infection (RTI) and inflammation,” said Pista.

The CMC-empowered women had been looking for livelihood opportunities and were introduced to an initiative in which they would manufacture sanitary napkins, using easy-to-use machines. The CMC thus transformed into a self-help group and the Baba Sahib Sakhi Sanitary Napkin Unit was born. Seven women-Vidya, Kamlesh, Jyoti, Sunita, Pista, Seema and Mukesh decided to form it. They visited an operational unit located at Khurrampur in Haryana to understand the process.

Prior to the start of the unit the group had to deal with two major challenges. The first was finding the space for the unit while the second was the absorbent capacity of the pad.

“We devised an improved version which lasts longer and is more absorbent and this is what we are producing in this unit. Vidya and her family supported us by giving us the space in their house without any rent,” said Kamlesh.

CFAR had a partnership with Vatsalya Foundation from Vadodara, Gujarat, which has developed the model of small low-cost units which can produce sanitary napkins using bio-degradable material. The napkin has been approved and certified by Micro Small and Medium Enterprise (MSME) and the Department of North Eastern Region – DONER, Government of India. The machines used in the unit are manual except one which is used for sanitising the product though a UV filter. The group underwent a three day-training in which they learnt how to produce and market napkins. “The napkin produced in this unit would be 100% organic and made of banana fibre and can be burnt, leaving behind a non-toxic ash which can be mixed with soil,” said Juhi Jain, Senior Programme Manager with CFAR.

Carrying the brand name of Sakhi, the sanitary napkins are being marketed by the group proudly in adjoining neighbourhoods and bustling markets. National media has recently written about their initiative, which has brought them appreciation from people who had not heard about them. Even as boxes fill up with sanitary pads, the women from the Baba Sahib Sakhi Sanitary Napkin Unit are now focusing on another important aspect – marketing. “We are better than the competition (big brands promoted by multinational companies) because we are safe and hygienic and are also using eco-friendly material,” says Vidya.

The success of this initiative will pave the way for many more similar enterprises. “We hope this will soon become a success story so that we can support more women in becoming agents of change,” says CFAR’s Executive Director Akhila Sivadas. 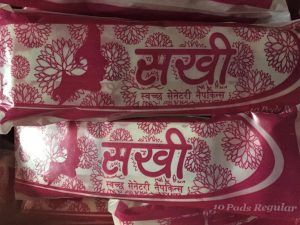 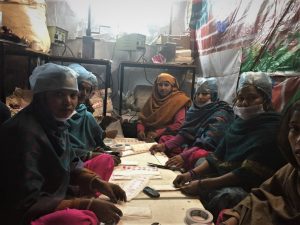 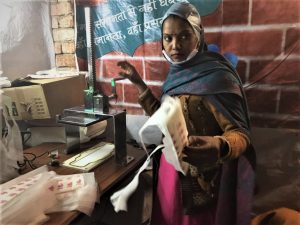 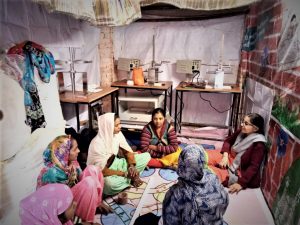