Bhubaneswar/Jaipur: This unique handwashing station is helping people stay safe and healthy during the pandemic. It costs little, made entirely of locally available material, and serves the needs of community members of slums in Bhubaneswar and Jaipur. The design for affordable and self-assembled handwash stations was developed in Barabhuja basti in Bhubaneswar’s ward 63, and has, since, served as a model for other community-led innovations.
The need for a foot-operated handwashing station was felt due to the knowledge that the COVID-19 virus can get transmitted when one touches contaminated surfaces. Since community taps are touched frequently, this was seen to increase the risk of transmission. In April 15, the CFAR team visited Barabhuja and shared the guidelines designed for densely populated areas, issued by the Government of India, with the Community Management Committee (CMC) and Single Window Forum (SWF) members. The advice included designing and building low-cost foot-operated handwash Stations. A Barabhuja resident, Rankanidhi Nayak (52), who is a carpenter and mason by profession, agreed to build the foot-operated handwash station.
Rankanidhi tried to make the model in the manner prescribed in the guidelines, but soon realized that without a proper wall or pillar it was difficult to set it up inside the house. “I attended the meeting with CMC and SWF members and CFAR, where the design and the ways of making it were discussed. I was also shown a video on how to do it. I tried to do it in that way with some small changes,” he said.
Rankanidhi said the handwash station could be made “at a very nominal cost”. “People can easily assemble it themselves and identify a place for it such as under the stairs or outside the house, etc. Ensure that this is near a drain so that the used water can flow into it,” he said.
Mamata Subudhi, a CMC and Mahila Arogya Samithi (MAS) member, said, “Such a handwash station should cost about Rs. 450 to Rs 500 so that we can afford it. If it is for one person, it should not exceed Rs. 100 to 150. We need to experiment with many sizes and bring the cost down to the maximum extent.” 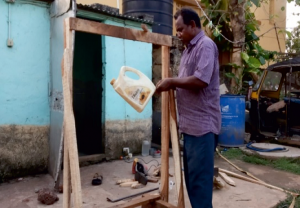 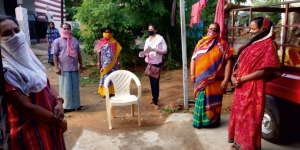 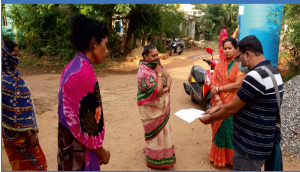 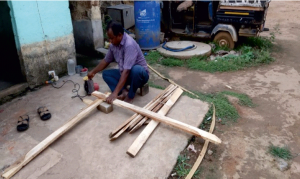 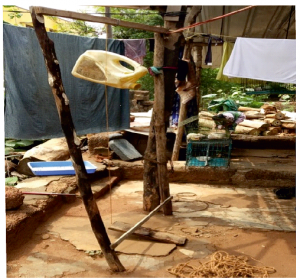 Jaipur model
Meanwhile, in the water-scarce city of Jaipur, handwashing stations using pipes and taps have been designed and installed by communities. The first was installed by a group of five community representatives in ward 10 of Kishanbagh Harijan Basti, a 35-year-old settlement in the Vidyadhar Nagar Zone of Jaipur. It came about in response to the pressing needs of the community.
Poonam, a sanitary worker from the basti said, “We are in the field for over 12 hours, collecting and segregating waste, cleaning manholes and choked drain and sewer lines. There are no facilities for washing hands for us. We can only wash and bathe when we return home. This increases the risk of infections not only for us but also for our children and other family members.”
The residents of the area are mostly frontline contractual sanitary and health workers involved in road-sweeping, rag-picking, desilting drains and manholes and desludging clogged sewer lines. It is ironical that although they provide sanitation services to others, a large proportion of their own households do not have sanitary toilets or piped water connections.
Why a handwashing station?
In a communication training on COVID prevention in August, the Community Management Committee, an empowered community forum instituted by CFAR in urban slums as part of its community engagement strategy, where female sanitary workers spoke of the high risk they were exposed to. They said that they did not have protective gear provided either by the urban local bodies or by the contractors.
A CFAR team member shared a video on the Bamboo Tippy Tap station set up by a community in Africa which made handwashing easy and fun for everyone. It was made using a hollow bamboo. However, since bamboo was not available locally, the CMC members suggested that they could use a PVC or a cement pipe and affix a tap to it, install it at the entrance of the settlement.
First handwashing station
Immediately after this, Subhash, Lakhan, Vishal, Radhe Shyam – members of the Male Forum –and Poonam, a Single Window Forum member, decided to set up the handwashing station in their settlement. It was decided that the station would be installed near the temple in an open ground which was at the entrance of the basti to make it easily accessible to residents. “We felt this spot will be ideal and many people will use the facility,” said Poonam.
The five-member team found a spare seven feet long cement pipe lying unused in the settlement. Two members dug a pit in the ground to place the pipe, and a small hole was made in the cement pipe and a tap was attached to it. The pipe was fixed firmly in the pit, using a paste of sand and cement. Once this was done, water was filled from the top with the help of a bucket. A soap bar was placed on a soap dish fixed on the pipe with the help of a rope. The Male Forum members volunteered to look after the station and also ensure that it was filled with water at all times. The members of the Community Management Committee took charge of providing soap and persuading people to use the facility.
Many more stations
Since then, handwashing stations have been set up in five more localities, including Transport Nagar, where is in front of the community toilet directly and benefits 55 households. In Swami Basti which has many persons with disability and children, the station has been installed in the school premises directly benefitting 45 households and four persons with disability. In Sundar Nagar, the station has been placed at the entrance of the basti benefitting 60 households. This station was made by Rafeek, a carpenter and a master trainer, who was supported by Aslam, a Male Forum member. Handwashing stations have been installed in Barabhuja, Bapu Basti and Rajeev Nagar too, where they are serving a large number of people, helping them stay safer and healthier during the pandemic. In all the locations, they are being managed and maintained by community members.
The handwashing stations have become a hit with the people, and are used by children, women, disabled persons, the elderly and others. “This is innovative, affordable and easily accessible for children and persons with disability,” said one of the users. 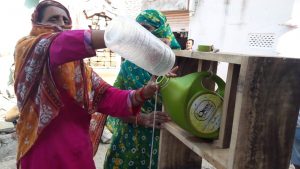 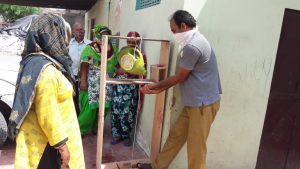 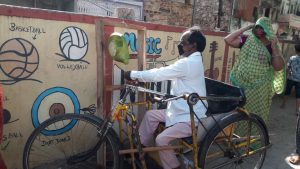 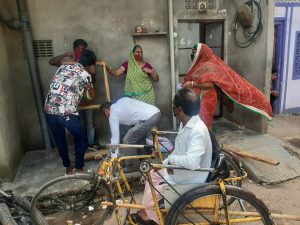 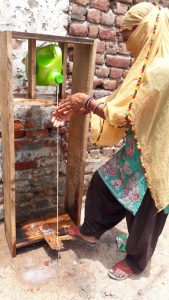 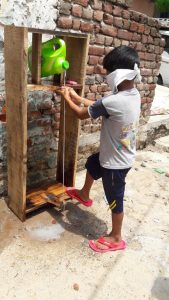 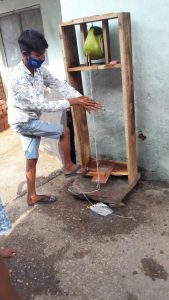 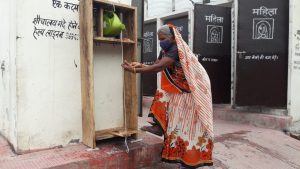